Raison D'etre for this site

A compilation of hints and tips on how to handle living in a severe drought scenario. These hints and tips are willingly shared by the people of Cape Town, and are aimed at whoever is in need - now - or in future, in order to ease their stress when faced with water shedding / shortages due to a drought

To find entries about specific subject please either use the search box or click on the appropriate label under the "Labels" section. 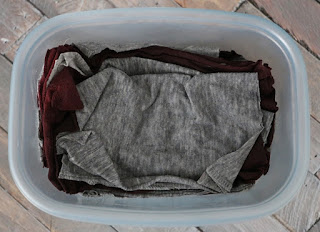 Instructions
Recipe Notes
I always have a plethora of old t-shirts with stains or tears so this is a great way to reuse them. If you don't though, you can buy the t-shirt rags from most hardware stores or even just use washcloths.As for the container, it just needs to seal so the wipes retain the moisture.You may need to increase or decrease the amount of the mixture you use in the container depending on the size and amount of shirts used. The rags should soak up the entire mixture and be completely damp.If your wipes start to feel dry overtime, add more of the mixture into the container.Use Tea Tree or Lemon Essential Oils for added disinfecting properties. 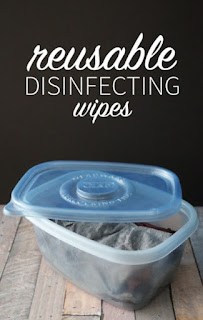 Yesterday at 13:59 · Cape Town
The average Capetonian is short on two things: Money and water. Installing a wellpoint appears to require a lot of both of these... But does it have to..?
Let me start by saying I'm in IT, and while I have been known to be somewhat proficient in DIY and get moderate exercise, my brain is my most prized asset i.e. Im not a physical powerhouse by any definition of the word

:)
After being stood up by a local wellpoint installer, I decided to take matters into my own hands and install my own, but with the aim of spending as little as possible and not using water to drill it. I read up extensively on diy wellpoints, looking for viable solutions and finally ended up buying myself a sand and clay auger with a handle and enough extensions to get down to 6.5m. It took me an hour to hit the water table, another hour to get down to a decent depth into it and probably one more to do the installation. Switched on the pump this morning and lo and behold, we now have a wellpoint

:)
Some factoids:
- The area is Goodwood, Northern Suburbs
- The drill used was a Burrowman Hand Auger, manufactured and sold by a chap that stays in KZN.
- I surveyed the area by speaking to my neighbours and other residents of the suburb to get an idea on whether they had wellpoints, what the depth was and what yields they were getting. This gave me a pretty decent idea of what to expect. I then picked the greenest corner of my otherwise dead, unwatered garden for the drilling location.
- The ground was sand, followed by a thin hard clay layer, followed by thin light coloured layer, followed by loads of dark brown water bearing sand. I was pulling runny, sandy mud out at the end.
- The water table (i.e. point at which drilling deeper requires drilling under water said sandy mud) was at 2.5m
- The total well depth was 3.5m, 1m below the water table
- The wellscreen was made from 25mm poly pipe (irrigation pipe), some slits cut with a hacksaw and covered with a stocking (lekke tappit)
- The pump is a DAB 102M I got off Gumtree for R500. Hello bargain.
I'm in the process of documenting the entire experience in detail, at which point I'll make it available for download from my website at martipedia.org so you can do the same if you choose. Granted not all areas are created equally, but it's worth a try!
UPDATE: Following many requests, please DM me if you'd like to rent my drill to have a go at drilling your own wellpoint. Its way cheaper than buying one.
Know this people: You can do anything you set your mind to.

Earlier this morning I posted about alternative ways of catching rainwater - especially for those unable to afford rainwater tanks.
(https://wswchintstips.blogspot.co.za/2018/03/alternative-ideas-for-capturing.html)

I now have another proposition / idea for you.

Long term, water scarsity is going to figure prominently in Cape Town - if not South Africa as a country. Going forward everyone will need to become more water self-sufficient and plans need to be made by EVERYONE - NOW - for your futures. Budgeting, making plans and actioning those will stand you in good stead and ensure that you can help yourself to at least provide some of your water.

So, my suggestion is this - build you own rain water container


Option 1: Either budget to buy a couple of cement blocks a month and, when you have enough, make a partially submerged rain water storage tank - as in pic 1.

Both would obviously need "plastering" inside, as well as the addition of a coat of pond paint to make it watertight. (Pic 1 is going to cost you - not only for the bricks, but also for the cement plaster. Pic 2 option is not going to cost you that much - just mainly for the plaster. Both will cost you some time though

😉
Both "containers" would also need a very secure lid to prevent animals / small children from drowing.
Please note: I am merely supply a concept / idea for an affordable water storage vessel - it is up to you to establish if you are legally allowed to do this.
My last hint is: decide what is going to be your secure lid, and work around that. There is no point in making something that you are unable to fit a secure lid to

Bemoaning the fact that you can't afford a rainwater tank? That your rainwater can't be captured because of the downpipe, or lack thereof?
Here a two simple ideas to assist you:
Pic 1 - dig a hole in the ground, and line it with builders plastic (gunplas) or a plastic tablecloth you already own. Make sure that you are able to securely cover the hole / water in order to keep animals / children safe) 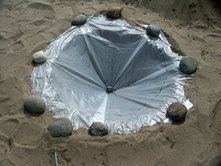 Pic 2 - create a water funnel - again using builders plastic (gunplas) or plastic tablecloth attached to and slung over a wire between poles (i.e. washing line and posts?) to direct rain water into a bucket which can then be decanted into rain water storage bottles. It will require two shorter posts being installed / devised for the lower end. 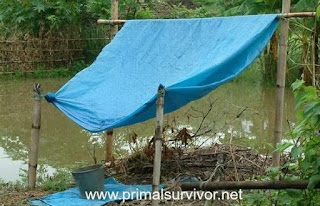 Do you have any innovative rain water catchment idea's that you are using that you would like to share with the group?   https://www.facebook.com/groups/watersheddingsa/